The Heartbeat of Communion 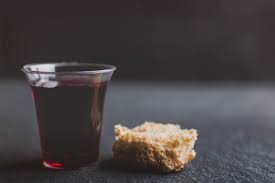 She wrapped her right thumb and pointer finger around the tiny, clear communion cup and cradled her left hand around it all. She stared into the dark grape juice.
The music played softly in the background while the ushers served communion to the congregation.
She could see the light of the sanctuary reflecting in the liquid circle in her hand. Her breaths were shallow while she tried to quiet her heart and soul. She thought of the disciples and wondered what they must have thought when Jesus handed them a cup of wine to pass and when He spoke of things they couldn’t quite comprehend yet.

While she looked down into the cup, she noticed consistent vibrations in the juice. Had she moved and caused the liquid to be stirred? Could the music have caused resonance?

She placed the cup on her Bible on the seat next to her. Nothing. The liquid didn’t move. She picked it back up. With the cup securely in her hand, her thumb pressing around it and her other hand steadily holding on to hand and cup, the liquid rhythmically pulsated once more.

In an instant it became clear to her. It was her own pulse from her thumb pushing through the cup into the dark, red liquid. No doubt, she saw her own heartbeat pulsating in the communion cup.

Before she lifted the cup to drink it, she silently thanked God for making a way for her to see it. She thanked Him for allowing her a small glimpse into this mystery that allowed her own heart to hide in His, to see herself as a part of this covenant that God made with His people. In that moment, when she saw part of herself in the cup, she knew again how much she was loved.

“God, I am forever grateful to You that my heart can beat for You.
You made a way for me through the blood of Your Son, Jesus Christ.
Thank You!”

…And likewise the cup after they had eaten, saying,
“This cup that is poured out for you is the new covenant in my blood.
Luke 22:20

That I’m in you and you in me
This is a profound mystery.
You died my death – your blood you shed.
I made alive while you were dead.

How can a mind like mine conceive
Why thrones and kingdoms you would leave
To make a wayward heart like mine
A temple and a holy shrine?
~
(Poetry and Essay by Heidi Viars, 2019)